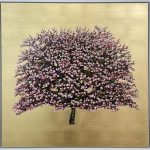 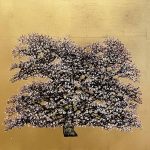 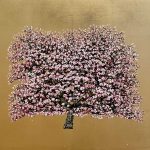 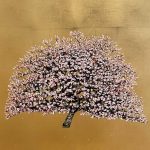 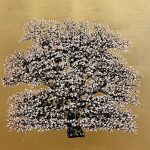 Born in Chatham, Kent in 1986, Jack Frame moved to Glasgow, where he graduated from the city’s School of Art in 2007 and specialised in Landscape Painting.

Describing himself as ‘magpie’ in his approach to his art, Frame is a romantic in the way he engages his artistic sensibility – always striving to strip away the heaviness of a scene, be it in a landscape or figurative painting. Thus in this series of works, the trees stand alone, often with gold leaf as the backdrop to the studies. The use of metal leaf throughout his practice has become a distinct component of his unique style.

Like Turner, he is always chasing the ether or atmosphere and the trees themselves appear to take on human qualities. It is as though, through the vehicle of the natural world, he is searching to place humans in context; to understand our place in an increasingly sterile global landscape.

‘I guess in the way Rembrandt kept returning to self-portrait, as a means of charting the passage of time, I keep going back to trees as a way of understanding the world’ he explains.

Jack’s success started very early on. He graduated from Glasgow with a sellout degree show and in 2009 gained a 3rd prize in the Jolomo Awards for landscape painting, cementing his position as one of the most exciting young artists working today. In the past few years, Frame has amassed a keen following of collectors both in the UK and internationally. His works have been shown in Europe, the States and Asia, including Singapore and Hong Kong.