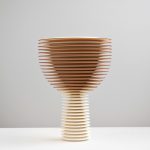 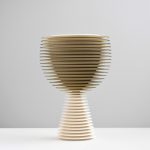 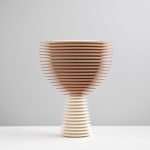 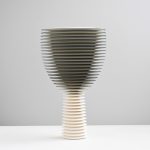 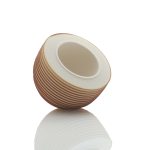 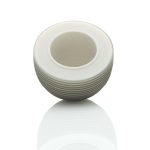 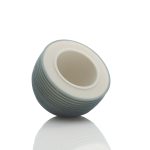 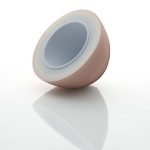 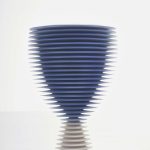 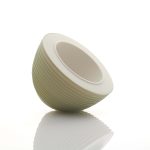 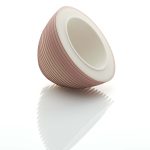 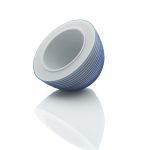 These works are about perception and interaction. I am fascinated by the transient and ephemeral nature of physical presence and how interactions between light, space, body and time condition our perception. This is informed by a lifetime’s experience of the same stretch of Scottish coastline, giving the realisation that the constant shift of light, tide and weather over time mean the experience of perception is forever transient. The monumental and archetypal form of ‘Triptych’ is made to have a material penumbra, manifesting interactions in the forms between presence and absence, and between object, light, space and viewer.

The works are made from Parian, a porcelain clay developed in Stoke on Trent in the 19th century to imitate marble . The pieces are thickly thrown on the wheel, dried slowly and evenly before the fins are formed through lathe turning of the leather hard clay before firing. This making draws on precedents from the industrial production of electrical insulators to the use of throwing and lathe turning by Wedgwood since the 18th century. The introduction of colour is inspired by my works on paper with ink, in which the interaction between wet and dry is used as a parallel for movement and the uncertainty of perception. The use of soluble metal salts in colouring ceramic is an unusual technique. Solutions of metal salts are applied to the interior of the biscuit fired pieces. The pieces are filled with water and saturated before being dried in the kiln. As they dry, the colour moves through the form and concentrates onto the edges of the fins through the suction caused by faster evaporation from those edges. The pieces are then fired to their top temperature to vitrify them. There is some cold work with diamond abrasive to finish the surface and make a stable base.

His work has been exhibited widely in the UK and overseas and is held in private and public collections including York City Art Gallery, Fitzwilliam Museum in Cambridge, Westerwald Keramikmuseum in Germany, and the Museo Internazionale delle Ceramiche in Faenza. He has won several awards including the Cersaie prize at the Faenza Biennale in Italy in 2015, the National Sculpture Award from the Bluecoat Display Centre in Liverpool in 2010 and the Desmond Preston Prize for Excellence in Drawing at the Royal College of Art in 2012. He has made a significant contribution to higher education in Ceramics the UK, as a Senior Lecturer at Bath Spa University between 2000 and 2010 and as a visiting lecturer on Postgraduate courses at Bath, The Royal College of Art and UCA Farnham since 2010. He lives and works in Hampshire, UK.