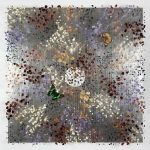 Born in England in 1982, Anna Masters is a mixed media artist currently working in Kent. She graduated from Staffordshire University, UK in 2005 with a First Class Honours Degree in Fine Art. She subsequently gained a Distinction for her Masters degree in Art Policy and Management from Birkbeck, University of London.

The materials she employs – predominantly natural, found or recycled materials – expose Anna’s love of form and attraction to detail. Though often organic in their appearance, each composition is thoroughly planned, often utilising geometry, symmetry and mathematics in their design. Particularly apparent in her recent works is a preoccupation with the resistance to time and change, and the paradox of its inevitability: the butterflies she uses, symbolic of change, are prevented from completing their life-cycle. Meanwhile, watch parts, the very mechanics of time, are suspended motionless apart from their counterparts, whilst time progresses regardless.

Anna was awarded a grant from Arts Council England in 2013 for the development of her mixed media works. She has exhibited widely within the UK, including public art projects Elephant Parade (2010 and 2013-14), Jungle City Edinburgh (2011), The Big Faberge Egg Hunt (2012) and the City of London Festival (2012), and overseas at art fairs in Europe, Asia and the States.